'Draws startling parallels with Meghan ... Both were 34 when they met their princes, both are adored children of strong, single mothers, both have a pared-down style and an electric presence and both are evidently worshipped by their Royal partners.' S Magazine The intimate biography of one of the most misunderstood women in British royal history. Life has always been made difficult for those marrying into England's royal family. In 1936, just months into his reign, King Edward VIII proposed to Wallis Simpson, a divorced American woman. Gossip ran wild, and that cacophony of speculation and distrust both hid the real Wallis, and forced Edward into abdicating so that he might marry the woman he adored. In this intimate biography Anna Pasternak seeks to understand Wallis - and her relationship with Edward and The Crown. Using testimony from her closest friends, she shows the warm, loyal, intelligent woman who was written off and undermined by the powerful, often manipulative men of the Establishment. This is Wallis Simpson's story as it has never been told before. Previously published as Untitled. 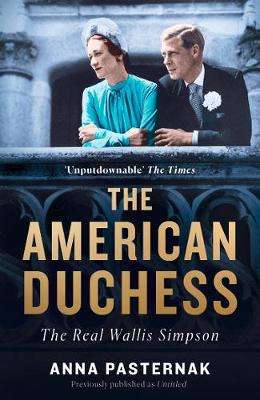 Paperback
The American Duchess: The Real Wallis Simpson also appears in these Categories: