The First to Die at the End

In this prequel to the No. 1 International bestselling phenomenon of TIKTOK fame, They Both Die at the End, two new strangers spend a life-changing day together after Death-Cast make their first fateful calls.

It's the night before Death-Cast goes live, and there's one question on everyone's mind: Can Death-Cast actually predict death, or is it an elaborate hoax? Orion Pagan has waited years for someone to tell him that he's going to die, given his serious heart condition. Valentino Prince has a long and promising future ahead of him and only registered for Death-Cast after his twin sister nearly died in a car accident.

Orion and Valentino cross paths in Times Square and immediately feel a deep connection. But when the first End Day calls go out, their lives are changed for ever - one of them receives a call . . . the other doesn't.

Told with acclaimed author Adam Silvera's signature bittersweet touch, this story celebrates the lasting impact that people have on each other and proves that life is always worth living to the fullest.

PRAISE FOR ADAM SILVERA: 'There isn't a teenager alive who won't find their heart described perfectly on these pages.' Patrick Ness, author of The Knife of Never Letting Go

'Adam Silvera is a master at capturing the infinite small heartbreaks of love and loss and grief.' Nicola Yoon, author of Everything, Everything 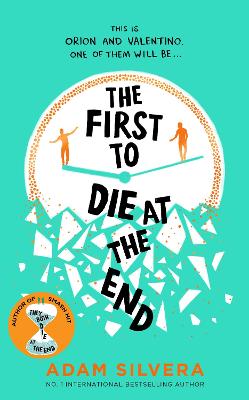 20% offTrade Paperback
The First to Die at the End also appears in these Categories:

20% off
The Stolen Heir: A Novel of Elfhame, from the author of The Folk of the Air seri
Holly Black
Paperback
€14.99