The Teachings of Don Juan: A Yaqui Way of Knowledge

Rethink your view of the world with The Teachings of Don Juan, the first book in Carlos Castaneda's spiritual journey into the world of sorcery... The Teachings of don Juan is the story of Carlos Castaneda's extraordinary experiences. In 1960 Carlos Castaneda was a graduate student when he met Don Juan, a Yaqui Indian feared and shunned by the ordinary folk of the American Southwest because of his unnatural powers. During the next five years don Juan's arcana knowledge led Castaneda into a world of beauty and terror, ruled by concepts far beyond those of Western civilisation. Using medicinal herbs Castaneda lived through encounters with disembodied spirits, shamans in the form of huge wolves, and death in the shape of silver crows. Finally, after a night of utter terror in which he knew that his life was threatened by forces which he still cannot fully explain, he gave up his struggle to become a 'Man Of Knowledge'. 'It gives a different view of the world and challenges the ideas and beliefs that we have be taught, whilst also providing simple methods to changing the way we interact with the world on a day to day basis.' - 5* Reader Review 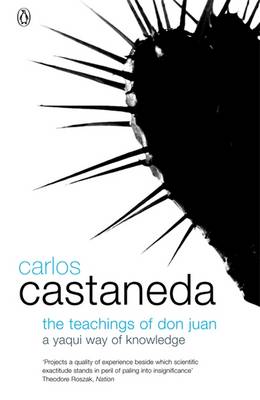 Paperback
The Teachings of Don Juan: A Yaqui Way of Knowledge also appears in these Categories:

Good Vibes, Good Life: How Self-Love Is the Key to Unlocking Your Greatness
Vex King
€13.40

Untethered Soul: The Journey Beyond Yourself
Michael Singer
€18.30