Perhaps his most famous work, Emile Zola's Therese Raquin is a dark and gripping story of lust, violence and guilt, set in the gloomy back streets of Paris. This Penguin Classics edition is translated with notes and an introduction by Robin Buss. In the claustrophobic atmosphere of a dingy haberdasher's shop on the Passage du Pont-Neuf in Paris, Therese Raquin is trapped in a loveless marriage to her sickly cousin, Camille. The numbing tedium of her life is suddenly shattered when she embarks on a turbulent affair with her husband's earthy friend Laurent, but their animal passion for each other soon compels the lovers to commit a crime that will haunt them forever. Therese Raquin caused a scandal when it appeared in 1867 and borught its twenty-seven-year-old author a notoriety that followed him throughout his life. Zola's novel is not only an uninhibited portrayal of adultery, madness and ghostly revenge, but also a devastating exploration of the darkest aspects of human existence. Robin Buss's translation superbly conveys Zola's fearlessly honest and matter-of-fact style. In his introduction, he discusses Zola's life and literary career, and the influence of art, literature and science on his writing. This edition also includes the preface to the second edition of 1868, a chronology, further reading and notes. Emile Zola (1840-1902) was the leading figure in the French school of naturalistic fiction. His principal work, Les Rougon-Macquart, is a panorama of mid-19th century French life, in a cycle of 20 novels which Zola wrote over a period of 22 years, including Au Bonheur des Dames (1883), The Beast Within (1890), Nana (1880), and The Drinking Den (1877). If you enjoyed Therese Raquin, you might like Zola's Germinal, also available in Penguin Classics. 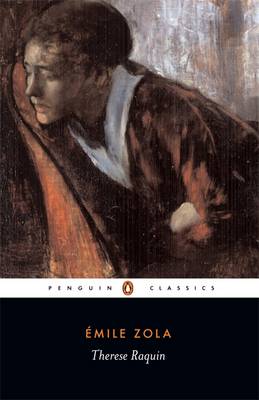