Tales of the Elders of Ireland

"'Dear holy cleric,' they said, 'these old warriors tell you no more than a third of their stories, because their memories are faulty. Have these stories written down on poets' tablets in refined language, so that the hearing of them will provide entertainment for the lords and commons of later times.' The angels then left them." Tales of the Elders of Ireland is the first complete translation of the late Middle Irish Acallam na Senorach, the largest literary text surviving from twelfth-century Ireland. It contains the earliest and most comprehensive collection of Fenian stories and poetry, intermingling the contemporary Christian world of Saint Patrick, with his scribes, clerics, occasional angels and souls rescued from Hell, the earlier pagan world of the ancient, giant Fenians and Irish kings, and the parallel, timeless Otherworld, peopled by ever-young, shape-shifting fairies. It also provides the most extensive account available of the inhabitants of the Irish Otherworld - their music and magic, their internecine wars and their malice toward, and infatuation with, humankind - themes still featured in the story-telling of present-day Ireland. This readable and flowing new translation is based on existing manuscript sources and is richly annotated, complete with an Introduction discussing the place of the Acallam in Irish tradition and the impact of the Fenian or Ossianic tradition on English and European literature. 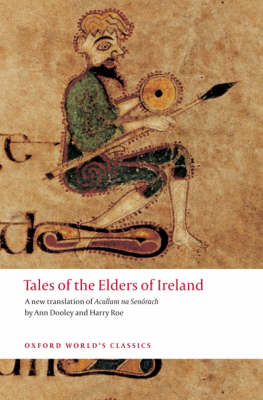 Paperback
Tales of the Elders of Ireland also appears in these Categories:

We Dare To Dream of an Island of Equals
Des Geraghty
Paperback
€16.99