Juvenal, writing between AD 110 and 130, was one of the greatest satirists of Imperial Rome. His powerful and witty attacks on the vices, abuses, and follies of the big city have been admired and used by many English writers, including Ben Jonson, Dryden, and most notably, Dr Johnson, who described his writing as 'a mixture of gaiety and statelines, of pointed sentences and declamatory grandeur'. Juvenal has been seen as a stern moralist and, more recently, as an extravagant wit, and is acclaimed for his vivid description of the scenes which aroused his anger. He coined the famous phrase designating people 'eager and anxious for two things; bread and races' (panem et circenses'). Niall Rudd's translation reproduces the original style and metrical effect of Juvenal's hexameters. William Barr's Introduction and Notes provide literary and historical background to the sixteen satires. ABOUT THE SERIES: For over 100 years Oxford World's Classics has made available the widest range of literature from around the globe. Each affordable volume reflects Oxford's commitment to scholarship, providing the most accurate text plus a wealth of other valuable features, including expert introductions by leading authorities, helpful notes to clarify the text, up-to-date bibliographies for further study, and much more. 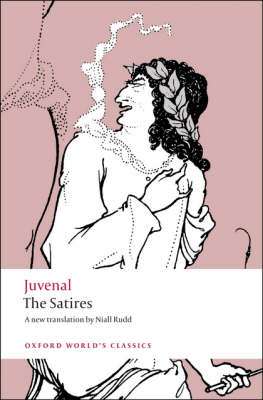 NUIG only
The Satires also appears in these Categories: